Many times, the first thing someone will say when they see a snowbike is, “What is that?!” They wonder if it’s anything like a snowmobile. Is it harder to ride? Is it more or less stable?

From my own personal experience, I can say without hesitation that riding a snowbike off-trail is a much more enjoyable and easier process than riding a snowmobile. I rode a snowmobile for several years before converting to snowbikes, and while I was no expert snowmobiler, we rode all the backcountry terrain as hard as we could. And boy, did I learn how to get stuck and how to get caught in the trees! There are a few reasons why snowbikes are the superior choice over snowmobiles when it comes to exploring the fresh snow out here in Montana, especially for beginners. Let’s look into some of the reasons why below. 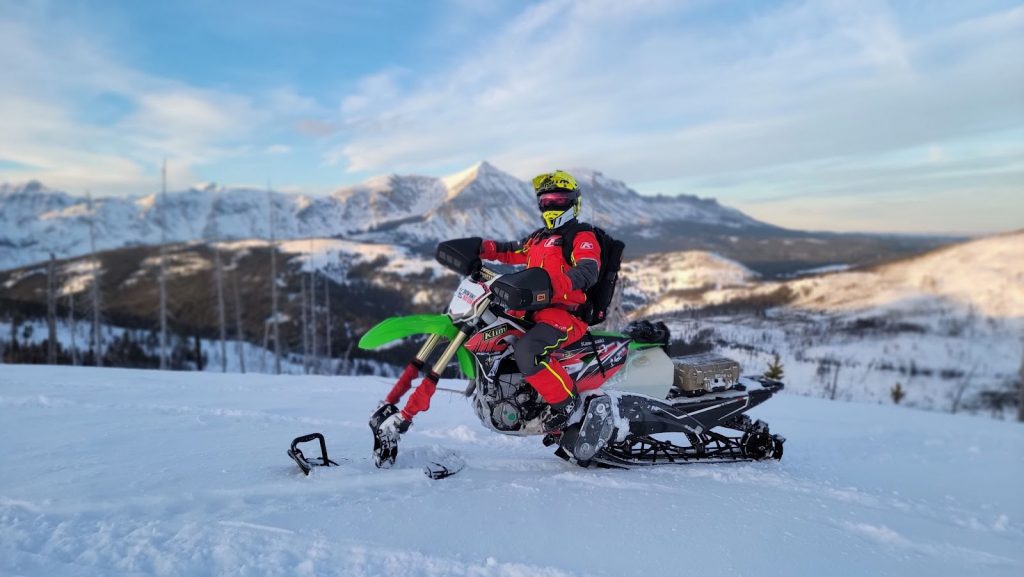 If you’re looking for an epic snowbiking adventure, the backcountry just outside of Glacier National Park is the perfect destination to go to! Here at SnowBike Nation, we offer incredible Guided SnowBike Tours and Rentals near Whitefish, Kalispell, Columbia Falls, Lakeside, and Bigfork Montana to help you and your crew get started. We’ll get you off the beaten path and into the zones that you’d never be able to get to on your own as a new snowmobiler.

Are snowbikes easier than snowmobiles?

For both beginners and in general, snowmobiles are oftentimes a poor choice to use when trying to reach certain areas, because riding off-trail and trying to sidehill can be extremely tough. However, on a snowbike, difficult maneuvers can become downright easy! This is simply because the only thing you have to control on a snowbike is one ski. Just lean the bike in, twist the throttle, and go!

Riding a snowbike feels like a snowboard with power. If a dirtbike, wave runner, and snowboard got together and had a baby, it would be a snowbike! Carving on a snowbike can be one of the most effortless and pleasurable experiences in the snow. As my daughter says, it’s like floating on a cloud.

While having motorcycle experience is helpful, it’s not necessary to successfully ride a snowbike. If you are adventurous and are willing to try something new, different, and exciting, then you have what it takes to try snowbiking!

I’ve taught close to over 100 individuals how to ride a snowbike, and I’ve realized there are some general basics everyone should remember. First, stop quickly. This sets the ski in the snow so the bike can stand upright. Second, don’t stick your foot out to catch yourself in the deep snow – you’ll fall over. And lastly, when in doubt, “throttle out”. This saying holds true for snowmobiles and snowbikes, and I’d say 90%-95% of the time more throttle, not less, will help you! 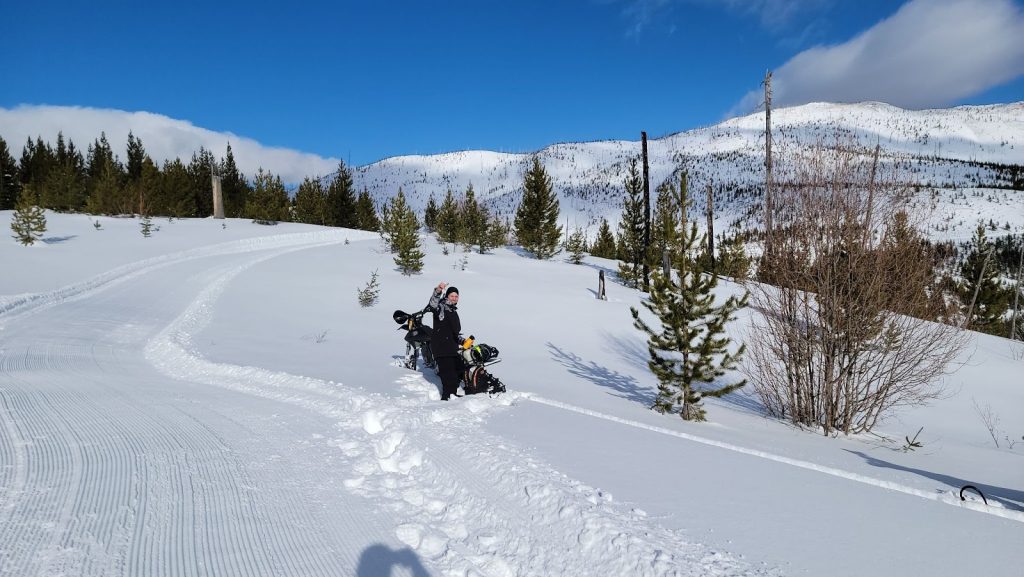 The Benefits of Electric Snowbikes

One great new addition we’ve added to our fleet is the electric snowbike. Electric snowbikes are smaller snowbikes that only have throttle and brake, so there are no shifting gears or worrying about a clutch. These are a great option for shorter people, or for people who have zero experience operating a clutch and shifting gears. Though we always do our best to teach you how to ride a regular snowbike, some people prefer the simplicity and small stature of our high-quality electric snowbikes from Moonbikes.

Ready to start planning your next adventure in Glacier National Park? Call us

With some of the most spectacular scenery in the country, snowbiking allows you to enjoy the sights in a way you may have never thought possible. If you’ve always wanted to try something new and unique in the backcountry of Montana, witness amazing views, or have the time of your life, then give us a call at (406) 607-6386. Here at SnowBike Nation, we provide the best snowbike and snowmobile tours near Glacier National Park available. Let us help you start customizing your next epic snow adventure today!

Read some of the awesome reviews from our clients who had little to no motorcycle experience:

Great experience with outstanding guides! They are very patient and knowledgeable about the bikes, and will help you learn no matter your experience or ability. Definitely a ‘Montana Must’ when visiting!!

Great all-around experience for beginners to experts! Kyle was knowledgeable, skilled, patient, and lots of fun to be around! Would definitely recommend to anyone!

This whole experience was hands down one of the best things I have EVER done! The bikes were a blast to ride (and way easier than I expected), the terrain was breathtaking/beautiful, and Kyle was a legend. He was helpful, knowledgeable, and safe about everything we were doing…plus he has a trailer that’s built out, and can [be used to] help you warm up if you get cold or need a break. Regarding my experience level, I have a little bit of motorcycle experience (have been riding for a couple years), and this was super easy to pick up and do. I was nervous going into it, but if you’re comfortable on a bicycle and/or know how to shift a motorcycle, you will pick this up quickly and be grinning ear to ear. I couldn’t stop hootin’ and hollerin’! Everyone needs to experience this at some point!

BOOK NOW
Back to top
Check us out on Instagram

SnowBike Nation LLC is operating under a Special Use Permit Issued by The Flathead National Forest Service – operating out of Kalispell Montana.